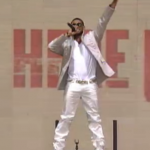 Dan anchored Nightline last night in a special episode that featured his exclusive interview with Usher’s ex, Tameka Raymond. Though part of it had aired on Good Morning America earlier yesterday, this piece went more in depth on the tragic accident and custody battle that have put her in the news lately. After two years of marriage and two kids, Usher and Tameka called it quits. After a divorce and custody battle, Usher was granted primary custody of the children, though Tameka planned to appeal. Now, after one son was nearly killed under Usher’s care in a pool accident last week (a year after her 11-year-old son passed away in a jetski accident), she took Usher back to court in an emergency custody hearing to no avail. Dan says, “What followed offered the public a rare glimpse into a celebrity custody battle. Now Usher’s ex, Tameka, says she wants to set the record straight.” Tameka says, “I feel like the kids are not getting proper care and I think the reason for that is he’s not there.'” Sitting down with Dan, she describes how Usher is a ‘control freak’ and details her effort to get more time with her kids. Watch the exclusive interview here.