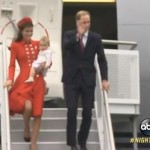 Dan started off the week behind the anchor desk of Nightline on Monday, April 7th. Last night’s episode looked into some pretty interesting topics. Oscar Pistorius, the athlete famously known as the “blade runner”,  finally takes the stand in his defense. Pistorius is on trial for shooting and killing his girlfriend, Reeva Steenkamp, whom he claims to have believed to be an intruder. ABC’s Matt Gutman brings Nightline the report from the South African courtroom. Next, Nightline talks to “fit mom” Maria Kang who sparked a lot of controversy when she asked “what’s your excuse?” in regards to being overweight. Thousand of women responded so Nightline brought together Kang and her adversaries to face off in person. Finally the last topic looks at the royal trio’s trip to New Zealand. William and Kate brought baby Charles on their first overseas trip as a family. Watch the full episode of Nightline, here.