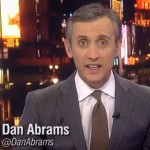 Dan was behind the anchor desk for Nightline on Friday, April 11th in an episode that looked at a variety of topics. It began with breakfast wars. Taco Bell has been generating big buzz for its new breakfast menu by taking aim at McDonalds. Why target McDonalds? Americans spend 32 billion dollars on breakfast each year and last year McDonalds made 10 billion dollars for breakfast sales alone while Taco Bell made $7.6 billion dollars for all sales combined. Taco Bell has been working on it’s breakfast menu for over 7 years now and a new ad campaign featuring real men named “Ronald McDonald” proclaiming their love for Taco Bell breakfast. The next topic looks deeper into the Church of Wells and the controversy surrounding this Christian group based in Texas. And finally, in the Feed Frenzy Hillary Clinton proves to be able to dodge a flying shoe. Watch the full episode here.