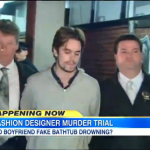 Dan appeared on Good Morning America, to cover the Nicholas Brooks trial.  Brooks, 26, was charged with first-degree murder of his girlfriend, Cachay.  In December 2010, Sylvie Cachay was found dead, partially submerged in an overflowing bathtub at the SoHo House while sharing a room with Brooks.  Friends of Cachay say that she was trying to break off the relationship just before her untimely death.  The prosecution has painted Brooks as an unemployed, drug-using slacker who was using his older girlfriend.  In regards to what else is playing in the prosecution’s favor, Dan says, “In addition to what you heard Amy talking about, which were letters she wrote, he was there.  He checked in with her.  This is the middle of the night.  This is not an easy place to get into.  This hotel/club.  Random people don’t walk around there.   He asked a detective when they initially arrived how much time he could serve if convicted of this.  A witness heard an argument in their room.  I mean, all of the evidence seems to point towards him.  And yet, the defense is, she overdosed on drugs and as a result, she passed out in the tub. On top of all this, the medical examiner’s report — becomes absolutely crucial, right?”  Watch the segment here.