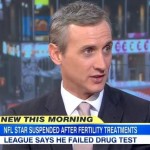 Dan joined the Good Morning America team on Tuesday, May 20th to discuss all-pro, Indianapolis Colts player, Robert Mathis, who was suspended for the first four games of the season for failing a drug test. Mathis tested positive for Clomid, a drug that is banned by the NFL because it can be used to help enhance a player’s performance. Mathis is claiming he took the drug for fertility reasons to help his wife conceive and stopped taking it once she became pregnant. In a statement, Mathis admits he made a mistake, not checking with the league before beginning his treatment and is accepting his suspension. What does Dan think about the issue and the choice the NFL made? Says Dan, “I don’t think they had a choice here, it’s a very clear violation of a very clear rule. He could’ve gone to the NFL first, he didn’t, and secondly the NFL is now spending a lot of time talking about, well this wasn’t an FDA approved drug for male fertility. So what? Whether it was FDA approved or not FDA approved, it was banned by the NFL… you’re an NFL player, you know the rules. ” Watch the full clip here.