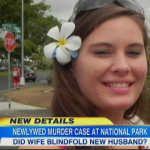 Dan appeared on Good Morning America today to discuss the newlywed murder trial, where Jordan Linn Graham is accused of pushing her new husband off a cliff just 8 days after they wed.  Some new details have surfaced thanks to the defense, that Graham blindfolded her husband before pushing him. Why are we hearing about this from the defense and not the prosecution? Explains Dan, ” The prosecution isn’t convinced this is part of the case. What the defense is saying is,  they’re considering this possibility and we want to prevent them [ the prosecution] from omitting evidence from this if this turns out to be case. Now, if this turns out to be the case, this is a fundamental game changer, for this case. Suddenly you’re going from someone who they seem to taking her word for, to some degree about the pushing, exactly how it happened is in dispute, but if this was a case where she blindfolded him, then you’re  talking about the real possibility of premeditation and a fundamental change in this case.” For more watch the segment here.