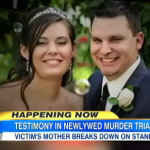 Dan appeared on Good Morning America to discuss the fourth day of the Jordan Linn Graham trial. Graham is accused of pushing her husband off a cliff and killing him just 8 days after they wed. The trial is expected to be wrapping up soon and Dan shares his opinion on the testimony given by victim, Cody Johnson’s mother and other happenings in the court. Says Dan on the mother’s testimony, “She’s offering a similar testimony to other witnesses; this idea that she’s lying afterwards, she’s not coming clean. She’s [ Graham] not telling people “yeah, I pushed him off the cliff,”. The difference is, coming from his mother, it is that much more emotional. So in terms of substance, what she’s offering,  isn’t that significant, in terms of emotion, incredibility powerful.”  Watch the full clip here.