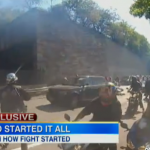 Dan appeared on Good Morning America today discussing the road rage incident that occured in New York on Sunday, September 29th and has since taken the internet by storm. One of the bikers, Christopher Cruz, was charged with reckless endangerment in the incident. He is currently facing up to a year in prison, though prosecutors have made clear that they may increase the charged.  Today, Cruz gave an exclusive interview to GMA about what happened. Is he believable? Dan answers, “The police don’t believe him, and when you watch the tape, it’s hard to believe his account, but this is going to be his legal defense, and I would expect he’s going to testify if this goes to trial. And this is exactly what he’ll testify to about what he was thinking. The problem is, as you watch that tape, and you watch him sort of go in front, and look behind him, and really seem to be slowing down to slow down the car, it’s a very hard account to accept.” Watch the segment here.