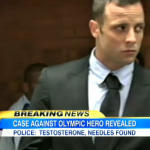 Dan again appeared on Good Morning America today, covering the case of Oscar Pistorius, the South African Olympic runner charged with murdering his girlfriend. In the latest, the defense has presented new evidence, including testosterone and needles. Dan discusses: “The prosecution has already presented a pretty strong case here, with all of the evidence laid out about what happened there. This has been an effective cross-examination, no question about it.” Dan goes on to explain why, how the police officials have managed to determine the truth amidst the defense and testimonies. He concludes by saying, “I think it’s unlikely [Pistorius] will be released, but I think he’s got a shot.” For more, watch the full segment here.