02 May Dan on New Court Explanation for Amanda Knox 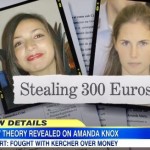 Dan discussed the new developments in the Amanda Knox case on Wednesday, April 30th on Good Morning America. In a 337 page court document, an Italian court lays out a new explanation for Meredith Kercher’s murder stating that Knox killed her roommate after a  “mounting quarrel” and Kercher accusing Knox of stealing money from her. The court also stated in these documents that they have “reliable” evidence that multiple killers were involved including Knox, her then-boyfriend Raffaele Sollecito and, the man currently serving time for the murder, Rudy Guede. Guede’s DNA was all over the room where Kercher was murdered but Knox’s was not. In a statement on these documents Knox has said, “[the new explanation documents] cannot change the fact of my innocence”. Says Dan, “It is an explanation of why they ruled the way that they did, it is interesting that the court seems to have a theory about exactly what happened and how it happened. Remember, initially prosecutors presented this theory of a possible sex game gone wrong, now it seems the court is saying no, we don’t buy that, we’re not even considering that, instead we think this was a fight that escalated, but how they put that knife into Amanda Knox’s hand I just don’t know.” Watch the full clip here.