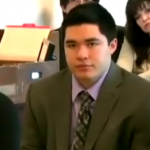 Dan appeared on Good Morning America today to discuss the case of Nathan Fujita, a Massachusetts high school student accused of murdering his girlfriend. His defense is claiming temporary insanity. Will the jury buy it? Dan answers, “This is a tough, tough defense here. They presented two witnesses, a psychiatrist and a relative, and even though the prosecution still has the burden to say he was not insane, this is a very tough thing to get a jury to accept. I think the best shot that the defense has here is second degree murder, which would mean the jurors don’t believe the prosecutors proved pre-meditation or extreme atrocity or cruelty… The notion that the jury would acquit based on a brief psychotic episode would be almost unheard of.” For more, watch the video here.