06 May Dan on Murder for Hire Secret Recordings 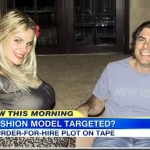 Dan appeared on Good Morning America, Thursday May 1st to discuss the Los Angeles businessman, Dino Guglielmelli, who is on trial for allegedly trying to hiring a hit man to kill his model wife, Monica Olsen.  Guglielmelli says he is innocent and has pleaded not guilty to attempted murder and solicitation of murder but newly released secret tapes reveal something different. On these tapes, obtained by KABC-TV Los Angeles,  Guglielmelli is heard trying to hire his associate and friend, Richard Fuhrmann, to murder his wife for $80,000 dollars. Guglielmelli had no idea that Fuhrmann was wired during this encounter. Says Dan, “There’s no stronger evidence in a case than an audio tape or a video tape, of the defendant making incriminating statements.” Watch the full clip here.