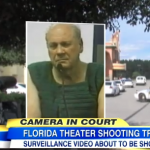 Dan appeared on Good Morning America to discuss the latest on the movie theater shooting that happened in Florida on January 13th.  A retired police officer is charged with second degree murder for shooting and killing another man over what began as a conflict about texting in a movie theater. Curtis Reeves claims self defense and will appear in a bond hearing to see if he will be released on bail until his trial. One crucial piece of evidence in this case is a surveillance camera the judge is allowing to be shown in court. Says Dan, “It will help determine, was there something thrown, remember that’s his defense, that something was thrown at him, it seems that’s his defense. Was something thrown? What was thrown?  When was it thrown? The timing becomes very important because, remember, there are two questions, number one is self-defense where he is going to say that he reasonably believed, that he was in danger of serious bodily injury or death. The other issue is trying to get this down from second degree murder to manslaughter. Second degree murder requiring intent and manslaughter being more sort of reckless conduct as if it was a fight. One person responding to the other and so in terms of that determination, the timing becomes really important and the video should be crucial.” Watch the full video here.