07 Mar Dan on Mother Who Drove Car Into Ocean 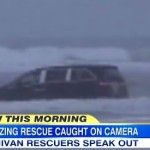 Dan appeared on Good Morning America to discuss the pregnant mother who drove her minivan into the ocean with her children inside. 32 year old Ebony Wilkerson was supposedly on her way to a shelter to escape her abusive husband when the incident occurred and she is currently undergoing psychiatric evaluation. Family members were worried about her mental state prior to the incident but there was nothing indicating she was a threat to herself or others. What are the legal implications of all of this? Says Dan, “Under Florida law there’s something called the Baker Act which allows you to involuntarily confine someone in a mental institution but only if they have found that there’s a substantial likelihood based on recent behavior that the person would be a threat to him or herself or others and what the police are saying, look, we talked to her. She said she was going to a shelter to try to get away from her husband. It all seemed to be legitimate. There was no reason for us to believe that she was going to be a threat to herself or her family and as a result, we did what we do in almost every case, let the person go on with his or her life. We heard Steve talking about the possibility of criminal charges. It’s possible.” Watch the full clip here.