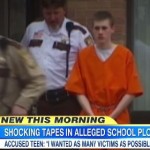 Dan joined Robert Roberts on Good Morning America, Thursday, June 26th to discuss the story of a teen from Minnesota who was accused of plotting to bomb his school and then kill his parents. A never-before-seen interrogation tape that was shared this past Tuesday shows teen, John Ladue, telling details of his alleged murder plot. He tells investigators that he first wanted to kill his parents and then his sister. Ladue also explains how he hides these violent fantasies from everyone, “[His father] He thinks I’m a good kid because I can lie pretty well and persuade him I’m just ordinary.” Ladue has pleaded not guilty to the charges, which includes attempted murder. Robin first asks about the importance of these interrogation tapes. Says Dan, “They will be very important pieces of evidence, in connection with this case. The charge here, the most serious charge is attempted murder and it’s starting to sound like his family is suggesting he never would have actually done it, that these were just fantasies, things he had thought about  but was never going to actually act on. And that’s why the tapes are going to become really important because if it ultimately gets to a jury…they would have to evaluate how realistic was this? Was this the rantings of a mentally ill person who never intended to go through with this? Or was it the actual intent of someone who was going to go forward and try to kill these people?” Watch the full clip here.