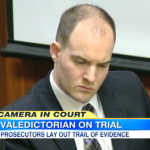 Dan appeared on Good Morning America again today to continue discussing the murder case rocking Michigan: former high school valedictorian Jeffrey Pyne on trial, accused of killing his mother. An inconsistent alibi, sustained injuries, and a history of an abusive relationship further complicate the case. Dan explains the latest developments alongside fellow legal analyst Nancy Grace, including potential test results from hair and skin found on the mother’s body: “If you have his hair in her hand, I don’t know how he’s going to explain that. I don’t think we’re going to have that kind of evidence, we shall see.” As evidence builds up, could Jeffrey Pine revert to a self-defense argument? Answers Dan, “No, there’s no way for him to overtly argue that, but what his lawyer wants to do is offer kind of subtle undertones throughout the case, reminders jurors (without saying it): ‘You know what, even if you think that he did this, even if you think he might have done this, this isn’t a case where you wanna convict here.'” For more, watch the video here.