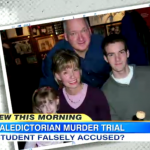 Dan appeared on Good Morning America today to discuss the case against a Michigan student accused of killing his mother. But was he even there? Of the situation, Dan explains, “You look at all these facts and it seems like exactly the kind of case where the defense would say ‘She attacked him, he defended himself, and this is what happened.’ That’s not what he’s claiming. He’s claiming he has an alibi, so the focus of this case is going to be on that alibi, does it make sense?” Though the police have tiny bits of evidence, Dan believes that it’s not enough and the case will really come down to proving or disproving the alibi. Further, the student (who was valedictorian), Jeffrey, has the support of his community and his father. Dan says, “I think it’s very important that his father, the husband of the victim, is supporting him in the context of this case. And the community support is the type of support that the defense hopes is reflected in this jury… I think that they hope that even if there is enough evidence here… that maybe the jurors will in essence say, ‘You know what? We don’t want to convict in the context of this case.’ It’s called jury nullification.” Watch the full segment here.