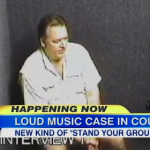 Dan appeared on Good Morning America to discuss a controversial trial of a Florida man, Michael Dunn, who killed an unarmed teen and is claiming self defense. Dunn was leaving his son’s wedding and was in the car outside when he asked four black teenagers to turn down the music playing in their car. Dunn says when he complained they started yelling and he says he saw something point at him from the SUV, he also says he was threatened. Dunn proceeded to grab his 9 millimeter and fire four shots, killing Jordan Davis, 17, in the backseat of the car. Says Dan, ” The key is really going to be self-defense. He did not seek a stand your ground hearing. Remember, one of the most controversial parts of it [ stand your ground defense] is it lets you try and avoid a trial and go to a judge and say I shouldn’t be tried at all. There wasn’t a stand your ground hearing here so this is a stand your ground/self-defense, the most important question will be was he reasonable in his belief that he was trying to prevent death or great bodily injury.” Watch the full clip here.