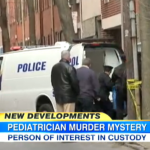 Dan appeared on Good Morning America today to discuss the murder of a 35-yearold Pennsylvania pediatrician, Melissa Ketunuti, who was  found hogtied and on fire in the basement of her home this Monday. While the police are awaiting the results of an autopsy to determine the cause of death, with no signs of forced entry, they wondered if she knew whoever killed her. However, this morning a man was charged after being captured on surveillance near her home around the time of her slaying.  He is an exterminator who had a job scheduled in the area and allegedly followed Ketunuti to her home, and was seen leaving about an hour later. Dan discusses the surprise suspect: “No connection, that’s the stunning thing when you think about the details of this crime – you’re talking about someone who was tied up, who was burned, who was strangled in her home. I mean, those of us who are sort of jaded crime reporters immediately presume that it is someone she knew very well.” He also notes that it was interesting that her boyfriend was cleared so quickly, and that the police feel confident that they have the right man. For more, watch the segment here.