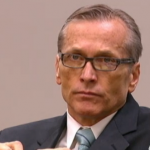 Dan continued to report on the trial of Utah doctor Martin MacNeill, this time for Nightline‘s “Crime and Punishment” series. Prosecutors allege that he is a manipulative adulterer who wanted his wife gone, and his daughters are taking the same side. But as the case unfolds, what will his defense be? Says Dan, “Today, a gaunt Martin MacNeill sat stonefaced as his frantic 911 call was played for jurors in the Utah courtroom where he’s fighting for his freedom. MacNeill is charged with killing his wife Michelle, a former beauty queen and mother of eight, in the bathroom of their suburban home, but it’s a case that never would have come to train if not for the single-minded determination of Martin’s own daughters who say they’re trying to hold him accountable for the death of their beloved mother in 2007… The prosecutor painted a portrait of MacNeill as a man who used his own medical training to meticulously plan the murder of his wife, and even bragged about it afterwards… but the defense argues the evidence against him is purely circumstantial.” For more on the case, watch the full story here.