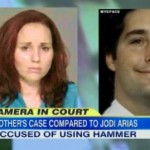 Dan was on Good Morning America Tuesday, April 1st to discuss the trial of Marissa Devault, a mother of three, accused of bludgeoning her husband to death and claiming self defense. This case is being compared to the Jodi Arias murder trial and coincidentally the two allegedly became friends while in prison. Like Arias, Devault is claiming that she was a victim of domestic violence but unlike Arias, has a witness. Says Dan, “The best defense she’s had so far with regard to abuse has been from other own daughter testifying that she heard it, that she actually was standing right outside the room as it was happening on a regular basis but, remember, the defense here is self-defense. So she still has to demonstrate in some way, I mean or at least the prosecution still has the burden of proof but when it comes to self-defense, you’ve got to present something, you got to say there was something that happened.” Watch the full clip here.