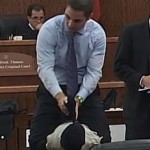 Dan appeared on Good Morning America Wednesday April 2nd to discuss the newest testimony in the Ana Trujillo trial. Trujillo is accused of stabbing her boyfriend to death with her high heel and the prosecution used the murder weapon to show a dramatic reenactment of the murder in the courtroom. The state is trying to prove that Ana went overboard and that a reasonable person wouldn’t have struck him as many times, however, the defendant, Trujillo, is claiming self defense. Says Dan on the prosecution reenactment, “Yeah, I mean effective and necessary, this is the murder weapon. You have to show exactly how you think it happened but…this isn’t an easy case when it comes to intentional murder. After all a heel does seem like the kind of thing you would use to defend yourself.” Watch the full clip here.