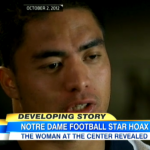 Dan appeared on Good Morning America today to discuss the scandal that rocked Notre Dame’s nearly perfect football season – star player Manti Te’o’s dead girlfriend hoax. Alongside the creator of the ‘Catfish’ documentary, Ariel Schulman, Dan looks at what happened and what lies ahead, especially regarding legal ramifications. He says, “It depends… first of all it depends on what state it occured in, but let’s even assume that it occurs in a state that makes it against the law to take someone’s identity, lie about it, you still have to have done it with the intent to harm, intimidate, threaten, etc.” Dan continues, “On the flip side of that, people are asking, ‘What about him? What if he did make this up? Could he face any sort of legal problems?’ And the answer to that one is no.” For more, including Notre Dame’s involvement, watch the full video here.