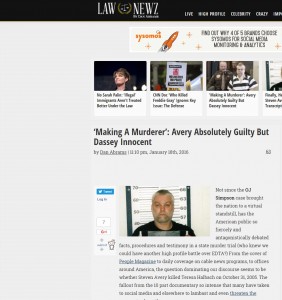 Dan has kicked off  LawNewz with a bang commenting on the Steven Avery case as well as the Brendan Dassey case from the hit Netflix documentary series, “Making A Murderer”. The true crime docu-series has struck a nerve with the public and has taken social media by storm, so Dan evaluated the evidence to weigh in on the guilt or innocence of Avery and Dassey. He writes, “Not since the OJ Simpson case brought the nation to a virtual standstill, has the American public so fiercely and antagonistically debated facts, procedures and testimony in a state murder trial”. Dan goes on to analyze the facts and evidence of the case and concludes (as the title of the article suggests) “Avery Absolutely Guilty But Dassey Innocent”. Read the full piece here.