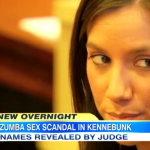 Dan also appeared on Good Morning America this morning to follow up on a case he had talked about on the show before: a prostitution ring run out of a zumba studio in Maine. In Kennebunk, ME zumba studio owners Alexis Wright, 29, and Mark Strong Sr, 57, were charged with counts of prostitution, promotion of prostitution, and violation of privacy, among other charges. On Friday, when Dan first discussed the case, it was unclear whether the names of the alleged Johns would be released, but now they have. However, their addresses were not released. Dan explains, “Typically, when someone gets accused of a crime, their names and addresses are released. So why is the judge saying this case is different? He’s saying it’s different because these alleged Johns, he says, are also alleged victims of the violation of privacy, because they were apparently recorded, taped having sex. So now the judge says they’re also crime victims, and crime victims’ addresses don’t get released.” Dan goes on to say that he thinks this compromise by the judge is “a bit of a stretch, legally.” Watch the segment here.