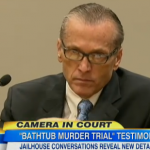 Dan appeared on Good Morning America this morning, to discuss the testimony heard by the jurors from fellow inmates of MacNeill. This past Tuesday, three inmates, who spent time with MacNeill behind bars, testified that the former Utah physician, whom allegedly murdered his wife, made unflattering comments about her whilst in prison. Explains Dan, ” These are sort of icing on the cake, these witnesses here, now the defense is going to say, ‘ Wait a second, every single time he says he didn’t do it,’ But I actually think that enhances the credibility of these witnesses because imagine if they’d all come in and every single one of them said ‘Yeah, he confessed, he confessed, he confessed’, and the defense would be saying ‘Oh come on you’re doing this just to try and get better treatment’, here you have them saying he didn’t confess but he was basically trashing his wife, I think that adds to the power of these witnesses testimony.” See the full story here.