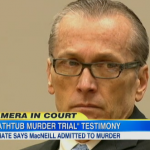 Dan appeared on Good Morning America this morning to discuss the testimonies given by some of the fellow inmates of Martin MacNeill. One such witness, who had spent time behind bars with MacNeill, claimed MacNeill confessed to murdering his wife during one of their jailhouse conversations. Says Dan, “Look, if you believe this testimony not only is he a horrible person but he’s a real idiot. You’re talking about again, and again and again making incriminating statements to prisoners and very often in these cases you see the defense suggest ‘My client never would have been so dumb as to BLANK’, and in this case it would be ‘My client, smart guy, savvy guy, would never have been so dumb as to make incriminating statements to prisoner after prisoner after prisoner…’ and yet we do see in a lot of high profile cases that very smart people can do very dumb things.”  Watch the full clip here.