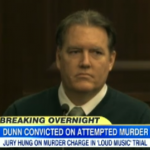 Dan appeared on Good Morning America, Sunday, February 16th to discuss the partial verdict in the Michael Dunn, “loud music trial”. Dunn was found guilty of three counts of attempted second degree murder, but the jurors couldn’t agree on the murder charge. Says Dan, “This was a tough self defense case, remember that he’s claiming, a shotgun was being pointed at him, and yet there is no evidence that there was a shotgun. There are witnesses from the scene who are saying he said things like ” you’re not going to talk to me that way”, which is not self defense. He never mentioned a gun on the whole way back, remember she [ his finance] was inside the gas station and so when she comes out and this has happened he never mentions them having a gun. So this is a tough, tough, self defense case.” Watch the full clip here.