06 Mar Dan on LIVE! with Kelly 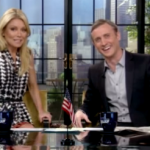 Dan spent two days co-hosting LIVE! With Kelly, and boy were they a charming pair. Day one was spent talking about chivalry – apparently Dan’s girlfriend Flo says he’s “only chivalrous when people are looking” and he admitted its something he has to concentrate on. They joked about comparisons to Adam Ant, and Kelly called the likeness uncanny. Dan sucked in his cheeks for effect, and then we realized he looks nothing like Adam Ant. Then, the two baked cakes:) Watch the full episode here.