30 Mar Dan on LIVE! with Kelly 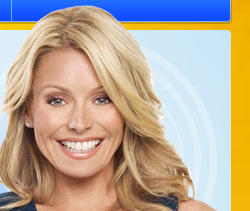 Dan co-hosted Live! with Kelly Ripa for the second time this month, for a charming episode with guests Channing Tatum and Anjelica Huston. Before those interviews, Kelly mentioned her next co-host, Mark Conseulos, who would appear on the show for his birthday. Potential gifts became the topic. Dan and Kelly considered a Rubiks cube, and watched a video of the record-holding, blindfolded Rubiks cube master. Dan was his ever-the-legal-analyst self, and questioned the feasibility of the act – was he handed the Rubiks cube in a specific position? A pre-established orientation? “I don’t want to say it’s shady, but…” Dan said, and Kelly wondered if it the cube was lubricated – “he was moving real fast!” The two also talked online dating, which Dan said he’s never done and cited a study that likened the newer-age practice with going to a bar. On dating in that setting, Dan revealed that “the [typical male] maneuver is always to walk up to the friend first.” And then Kelly said “I was always that friend.” For the full episode, click here.