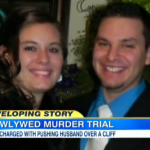 Dan appeared on Good Morning America today to discuss the case of a wife who pushed her husband off a cliff in July, only 8 days after they were married. Jordan Linn Graham told friends she was having second thoughts about marriage to her husband, Cody Lee Johnson. She seems to have admitted to the crime and is being charged with second-degree murder in a federal court since the incident occured in Glacier National Park. Dan says, “The big problem is the lie she told. If she had said, ‘look, we were up on the top of a mountain and we got into a little bit of an altercation and the next thing I know, I just pushed him and he falls off a cliff,’ I don’t think she’d be charged with murder. The problem is she came into this case saying, ‘The last time I saw him he was being takenaway  in a car,’ and then she’s the one who found the bodyat the bottom, then later she makes this confession where she says that she pushed him – I think that’s the reason she’s charged with murder here.” For more, including a potential plea deal, watch the segment here.