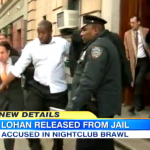 Dan appeared on Good Morning America today to discuss the latest legal trouble for actress Lindsay Lohan. She was arrested late Wednesday night whilst leaving a nightclub in Chelsea, just three days after her latest project, Liz&Dick, appeared on Lifetime. Despite this, she hasn’t been formally charged — so what happens? Answers Dan, “The DA’s going to investigate; the DA’s going to look at the police report. They’re going to determine whether they want to file formal charges in connection with this. If there is a charge, it would be a misdemeanor — they’re going to want to talk to the alleged victims, talk to the witnesses, etc. and then make a decision at that point.” Just hours before her NYC arrest, she was charged with reckless driving and misleading police in California. Will that influence this case? “It’s not going to influence this investigation, but it’s a bigger deal because she’s on probation in California in connection with stealing a $25,000 necklace. Probation means that if you do something else wrong, meaning in this case she’s now charged with three new misdemeanors, she could be sent to jail as part of the sentence on the previous crime.” For more, watch the video here.