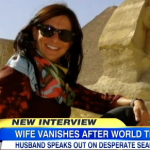 Dan appeared on Good Morning America on Monday, January 27th to discuss the mysterious disappearance of a woman in Texas.  Leanne Bearden disappeared while out on a walk about one month after going on a trip around the world with her husband. Landscapers saw her leave and head north and she has not been seen since. The fact that police have ruled out her husband as a suspect is a big step. Says Dan, “For now, they’re ruling him out. That tells you they have investigated already. They talked to him, the friends. They read the blog. The fact at the they have his laptop. I think this is all very helpful to him in allowing them to look at other things. Meaning, from his perspective, it’s let the authorities focus their attention where it ought to be, which is, not on me. The best way to do that is be cooperative, give them everything they want. Help them rule you out.” Watch the full clip here.