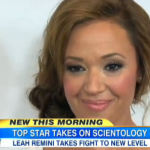 Dan appeared on Good Morning America today to discuss actress Leah Remini, who has taken her confrontation with the Church of Scientology to a new level. After making headlines in July when she left the Church, she has now filed a missing person report on her friend Shelly Miscavige, the wife of the church’s ecclesiastical leader, David Miscavige. The report has been dismissed by police, but Shelly Miscavige has not been seen in public in six years, according to the LA Times. Her whereabouts have been a source of speculation among the Church of Scientology’s critics, but Hours after Remini filed that missing persons report, the LAPD told ABC News that the case was both closed and unfounded. Dan explains, “It’s clear that this is now an all-out war between Leah Remini and the Church of Scientology… you haven’t seen language like this from the Church against her up to this point… now they’re going after her… this is now an all-out battle.” He continues that the LAPD would have had to take the report and then establish how viable it is, and “that’s the first thing that they did here… they did what you’d expect them to do in any case, put aside scientology – they went and found her and they talked to her.” For more, watch the segment here.