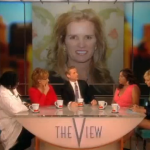 Dan appeared on The Viewyesterday morning, July 16th to discuss the latest headline-making legal stories alongside the ladies. He covered topics ranging from The Kennedy’s (one of whom was arrested for driving a tractor under the influence) to the tragic death of Sylvester Stallone’s son Sage to Scott Peterson (attempting to appeal his murder conviction). He also weighed in on one of the most buzzed-about legal stories of the year, a case that won’t seem to go away: the Penn State sex abuse scandal. In the wake of a report that found that knowledge of the abuse was widespread amongst university officials, Abrams speculated that more civil lawsuits will be filed by victims against the university. To learn all of his analyses and predictions, watch the segment here.