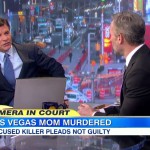 Dan appeared on Good Morning America, Friday, March 13th to discuss the case of 19-year-old, Erich Milton Nowsch, charged with murdering Tammy Meyers, a Las Vegas mother. The killing, along with two other felony charges, occurred during an alleged road rage incident but as the case unfolds it is beginning to look more complicated. Nowsch is claiming self-defense and has pleaded not guilty to the three felony charges. What did Dan have to say? “The fundamental legal question, is it self-defense and who shot first? And it sounds like the police believe they have evidence that the defendant shot first. Now, what evidence could that be? First of all his own statements. It seems he was talking to friends and made a statement to the police. They may have physical evidence at the scene meaning shell casings or other evidence which suggests…that maybe he shot at the car before they got to the house first. That would be one thing but if he shot first does that end the case? No, but it certainly is strong evidence.” Watch the full story here.