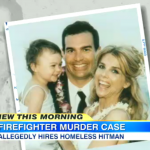 Dan appeared on Good Morning America alongside fellow legal analyst Nancy Grace today to discuss the case of a Las Vegas firefighter who allegedly attempted to have his wife killed for $600. George Tiaffay is accused in the murder-for-hire plot, of hiring a homeless hit man, Noel Stevens, 37, to beat his wife Shauna to death. Of George Tiaffay’s possible next move, Dan explains, “The key is going to be linking the two of them… because Tiaffay is going to say, ‘look, [Stevens] may have done it — I’m not sure this will be his defense, but likely will be his defense, which is basically trying to distance himself as much as possible from Stevens, saying, ‘look, he may have had something to do with it, I had nothing to do with it; yeah, I had him do odd jobs around my house, etc. but you can’t link me to the crime.” Dan goes on to make a point he’s made time and time again on GMA: “Hit men don’t exist.” He explains that you can’t actually hire hit men, so these criminals often end up turning to someone around the neighborhood like Stevens. What happens in trial remains to be seen. Watch the video here.