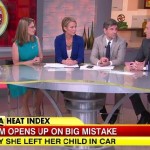 Dan joined the Good Morning America team and Dr. Robyn Silverman, on Friday, June 6th to discuss Kim Brooks, a mother who was charged with a misdemeanor after leaving her 4-year-old son alone in the car for a short period of time. Brooks says that she only had to run into the store to grab something and her son didn’t want to get out of the car. Once Brooks left the car, someone videotaped her son alone inside and turned it over to the police. While Brooks’ son was unharmed, police charged her with a misdemeanor for contributing to the delinquency of a minor. Brooks recently revealed the ordeal on salon.com and her confession went viral with mixed responses, some saying that the system is out of control, others saying it is definitely neglect.  What does Dan have to say about the legal repercussions?  “Once they had this evidence, and she’s not denying she did it, they had to move forward, because there’s no way to distinguish this from other cases, where in this case, she was just running in for a few minutes, as opposed to this case,  it was 12 minutes. You have to draw a line. And I would also say, the fact she just got a slap on the wrist is also the right thing to do.” Watch the full clip here.