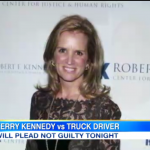 Dan appeared on Good Morning America today to discuss the arrest of famous Kennedy family member, daughter of the late Senator Robert F. Kennedy, Kerry. After a collision with a tractor-trailer last week, she was arrested and charged with driving while impaired, and will plead not guilty to driving under the influence today. She is reportedly unable to remember what had happened though she said to police she might have taken the prescription drug Ambien. The Kennedy family denies this, but her toxicology results are pending. So what does Dan think? He explains that this charge is a misdemeanor, with a maximum sentence of up to one year in jail, but “no one expects that she would actually get jail time in connection with something like this.” What makes this case interesting, Dan explains, is the specific drug — Ambien, which often people use as a defense, claiming they didn’t even realize they had been driving thanks to the drug’s influence. But whether it was Ambien, some other impairment, a medical accident, or none of the above remains to be seen. Watch the video here.