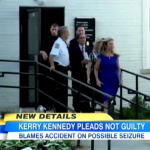 Dan appeared on Good Morning America today to follow up on his coverage of the Kerry Kennedy case. Kerry, daughter of the late Senator Robert F. Kennedy, had a collision with a tractor-trailer last week and was arrested and charged with driving while impaired. Yesterday, she pled not guilty to driving under the influence. So what will be the penalty if she’s found guilty? Dan is surprised at the amount of attention being given to a misdemeanor case, but after her press conference yesterday, it is clear that her story and the authorities’ story are very different, and “in a  high-profile case, the rules are different… when the world is watching, everyone’s got to stand their ground,” he explains. So will this go to trial? “Usually with a misdemeanor, you negotiate these things… but in this case you really may see it go to trial and have a war of experts,” answers Dan. If Kennedy had a seizure, her incident was not a crime, but if she had taken prescription drugs that impair driving, the story will be different. Watch the full video here.