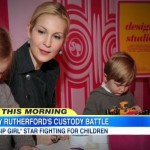 Dan was on Good Morning America, Tuesday, April 14th to discuss actress Kelly Rutherford’s passionate fight to get her children back. Rutherford has been embroiled in a 6 year custody battle that she says has “spiraled out of control” when a California judge sent her children to live in France with her German ex-husband who was refused reentry to the United States. Dan recently wrote an article on this on going legal battle and suggested the State Department get involved and now, based on the most recent court ruling, it may need to happen. Rutherford was denied a request asking a federal court to bring her children back to the United States despite the fact the children are American citizens and there is no allegation that Rutherford is an unfit parent. Dan commented, “…Make this political. Have the State Department get involved have some leading political figures make compelling arguments that this is ridiculous.” Watch the full segment here.