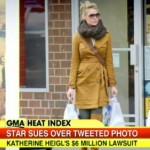 Dan appeared on Good Morning America, Friday April 11th and discussed actress, Katherine Heigl’s 6 million dollar lawsuit that she filed against pharmacy and convenience store chain, Duane Reade. The actress was photographed by a paparazzi carrying a few Duane Reade shopping bags and the drugstore chain proceeded to tweet to it’s over 2 million followers, “Love a quick #DuaneReade run? Even @KatieHeigl can’t resist shopping #NYC’s favorite drugstore”. Heigl is suing for 6 million dollars because, according to the lawsuit, Duane Reade “misappropriated the photograph for it’s own commercial advertising” and then failed to respond to a cease and desist. One day after the lawsuit was filed Duane Reade removed the photo from their social media sites. What is Dan’s opinion? “Tough case, I mean she’s going to have to show it was effectively an advertisement and she’s going to have to show that people would think that it was an endorsement, meaning she was actually endorsing it. Remember you’re allowed to tweet things and commentary about things… what you can’t do is take out an ad with that person’s image and then put it out there.” Watch the full clip here.