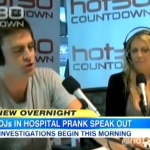 Dan appeared on Good Morning America today to discuss whether the two Australian radio DJs responsible for the prank call to Kate Middleton’s hospital which ultimately resulted in the death of nurse Jacintha Saldanha will be prosecuted. The short answer? Probably not. The long answer? Dan explains, “There is a technical violation, which is using a listening device then broadcasting that particular tape, so maybe there’d be a fine or something like that, but I don’t think there’s going to be any serious prosecution here because it will be very tough to link the actual death to the prank.” He continues, “You can link it as a moral matter, but as a legal matter there would need to be a level of foreseeability… and that’s a tough link to make.” Watch the full segment here.