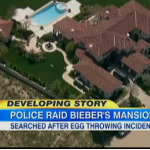 Dan appeared on Good Morning America on January 15th to discuss the allegations against pop star, Justin Bieber, who allegedly threw eggs at his neighbors mansion causing $20,000 dollars worth of damage. The police swarmed Bieber’s mansion to search for evidence indicating that he was responsible for the egging and a friend of Bieber was arrested on drug charges. Authorities say that Bieber cooperated during the search and is currently neither arrested or exonerated.  Could Justin Bieber really go to jail if charges are brought against him? Says Dan, ” In theory, based on the amount of damage that was done here but let’s be honest, if this wasn’t Justin Bieber you wouldn’t have a dozen investigators going into investigate an egging incident. They’re going in to look for surveillance video and possible eggs? What, they’re going to come out with 26 brown grade A and 12 white organic eggs as evidence against Justin Bieber because there had been an egging incident? I mean not to say it doesn’t matter but when you’re talking about using the criminal law here with a dozen investigators it doesn’t seem to be the best use of the police force.” Watch the full clip here.