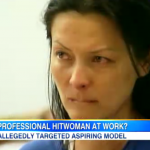 Dan appeared on Good Morning America today to discuss the case of California woman Kelly Soo Park, arrested and accused in the 2008 killing of actress Juliana Redding. Park was charged with beating and strangling 21-year-old  Redding to death; she pleaded not guilty and has been awaiting trial for more than two years. Dan explains that while, yes, it may be hard to believe that a woman could be a physical enforcer of a crime like this, Park’s DNA is all over the crime scene. Dan says, “You’re talking about bloog, you’re talking about fingerprints and DNA evidence, all there at the crime scene coming back to her, and of course then the question will be what was she doing in the house? Because most often when you find that kind of evidence at a crime scene, the person will say ‘yes, I was there, yes, I knew the crime victim’ — there’s no reason that she would have known the victim that we know of, but we’ll see once the defense begins.”  Watch the video, including Dan’s explanation of the doctor who links Park with the actress via a business deal with Park’s father, here.