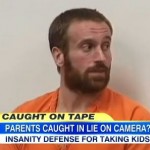 Dan weighed in on the case of Joshua Hakken, the father who is accused kidnapping his children and then faking insanity to avoid trial. Joshua Hakken and his wife Sharyn were charged with kidnapping their two little boys last April. Hakken and his wife who pleaded not guilty by reason of insanity are now being accused by prosecutors of faking insanity to avoid charges. Says Dan, ” Initially he was deemed not fit to stand trial. What does that mean? That means initially the court was saying he can’t even assist in his defense. He doesn’t understand the proceedings against him. So we’re not even going to move forward with this trial. It now seems they are going to move forward and now phase two is, I’m going to plead insanity which means I’m going to say that I didn’t understand right from wrong at the time of the actual incident. That’s where the tapes will come into play. Absolutely, because, look, this is a tough insanity defense, you’ve got these parents who allegedly kidnapped their kids from the grandparents who are going to testify. Take them to Cuba, are caught in Cuba. You know, when you think about the idea they didn’t understand right from wrong and they’re taking their kids to Cuba. A lot of planning. You know, it sure seems like you knew what you were doing was wrong when you find the one place you think you’ll be able to get away with it.” Watch the full clip here.