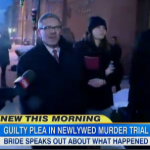 Dan appeared on Good Morning America this morning to discuss the twist in the Jordan Linn Graham murder trial. Graham is accused of killing her husband just 8 days after the couple wed. The trial began on Monday, December 13, 2013 and was moved along rather quickly by the judge. Graham agreed to a plea deal where she pleaded guilty to second degree murder and recounted how she pushed her new husband over a Montana cliff last summer. She described it as ” reckless act,” as the judge demanded she tell the truth about what happened before he accepted her plea. Says Dan ” He wanted to make sure that she understood what she was doing, he wanted to make sure she was accepting responsibility for what she had done and he wanted to make it clear how serious a crime this is. He repeatedly said you realize you’re talking about the possibility of life in prison here, she said, yes. Now as a practical matter, this is not going to be a life in prison case now. It could have been, if she had been convicted of first degree murder. It probably would have been if she was convicted of first degree murder, but now you’re talking about starting around twenty years as a possible sentence. I think it will go slightly below that because she has now plead guilty…” Watch the full clip here.