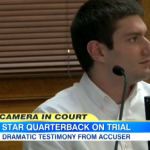 Dan dropped by Good Morning America today to discuss the start of the sexual assault trial of Jordan Johnson, star college athlete & former quarterback for the University of Montana Grizzlies. The case has divided the community and rocked the college football program. Today, Johnson takes the stand as the very first witness in the trial. “It’s a high profile he-said-she-said playing out in Montana this week, with the alleged and the accused facing off in court for the first time,” Dan says of the trial, continuing, “In addition to the fact that a star athlete is on trial, many are watching this case closely because local and university officials have been accused of ignoring or minimizing dozens of rape allegations.” So what will happen as he takes the stand? Dan answers, “The defense is saying she’s making this up, she’s lying… and as a result I think the cross-examination has to be tough.” Watch the segment here.