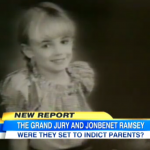 Dan appeared on Good Morning America to discuss developments in a very famous case, that of JonBenet Ramsey. There’s been a new grand jury report on the death of the 6-year-old beauty queen. Ramsey was found dead in the basement of her family’s upscale Boulder, Colo., home on Christmas Day in 1996. Her parents, John and Patsy Ramsey, were suspects, but they insisted an intruder was to blame and they were never prosecuted. Now, a new report shows that during the 1999 trial, a grand jury believed there was enough evidence in 1999 to indict John and Patsy Ramsey on charges. However, District Attorney Alex Hunter refused to sign off on the grand jury’s decision, saying there was too little proof. Though this is rare, it can happen (often if new evidence comes into play after the grand jury’s deliberation), and Dan says that he agrees with the decision. “I’ve seen the majority of the case files and I think Alex Hunter made the right call,” he said. “I think there simply was not enough evidence to move forward.”  Watch the full video here.