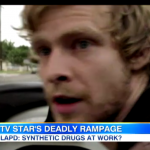 Dan appeared on Good Morning America today to discuss the death of actor Johnny Lewis and the strange circumstances surrounding it, including the crimes he allegedly committed right before passing. The actor, best known for  Sons of Anarchy, is believed to have killed his landlady and then killed himself, and there is suspicion that a synthetic may be at work behind the actions. It’s a bizarre Hollywood murder mystery: In response to 911 calls, police found Lewis’ 81-year-old landlady, Catherine Chabot David, beaten and strangled to death, her cat dismembered, and Lewis was found in the front yard, believed to have plummeted off the roof to his death. Could it have been prevented? Lewis, who was on probation, had recently completed treatment. Dan weighs in, saying there’s only so much the probation officer could do. Further, regarding the drugs, Dan says, “It’s a cat-and-mouse game. Obama just signed into law a bill banning many of these. The problem is the new ones then pop up.” Watch the full segment here.